May 22, 2018-- (NYSE: OA), a global leader in aerospace and defense technologies, congratulates GySgt. of the for receiving the Aviation Association s (MCAA) Jack W. Demmond award at the MCAA Annual Symposium. The award, sponsored by , recognizes the Aviation Ground Marine of the Year and was established in honor of Lt. Col. Jack W. Demmond, who served aviation with versatility and distinction for more than 29 years. The award recognizes the most outstanding contribution by a ground Marine serving with Marine aviation. The recipients are Marines of all ranks who are nominated by their superiors and vetted through . 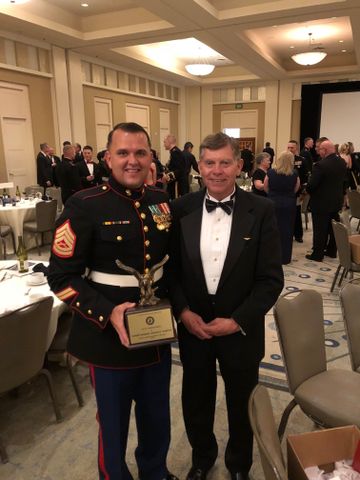 , - 372, is the recipient of the Jack W. Demmond award for Aviation Ground Marine of the Year. Presented by , , at the and . (Photo: Business Wire)

It is with great pleasure that we congratulate GySgt. Jonathan E. Thornton for being recognized in a field of his peers of highly successful and accomplished Marines, said , Vice President and General Manager of the Defense Electronic Systems Division of Orbital ATK s . Orbital ATK is honored to once again partner with the MCAA to sponsor the Jack W. Demmond Award and recognize GySgt. Jonathan E. Thornton s significant contributions to keeping our nation safe.

For more information about the . awards visit http://www.flymcaa.org/awards.