As the booster integrator, Orbital ATK is bringing together and testing all components of a five-segment solid rocket motor in preparation for next year’s booster qualification test, known as QM-2. Orbital ATK’s Promontory, Utah, facility will host the QM-2 test, which represents a significant milestone as the booster progresses toward its first flight scheduled for 2018.

“We pursue human space exploration because of the inspiration it provides for us to improve our capabilities across the board,” said Charlie Precourt, vice president and general manager of Orbital ATK’s Propulsion Systems division. “Systems developed to transport humans to space, and support their activities in space, continually result in improvements in our everyday lives.”

The hot-fire test simulated the test cycle that will be used during QM-2, which closely resembles real flight conditions.  This activity was an additional opportunity to demonstrate successful operation of both the avionics and TVC systems using the “test-like-you-fly” approach.

Cincinnati Electronics provides the avionics system boxes, and Southern California Braiding is responsible for the cable harnesses. Both suppliers have been integral to Orbital ATK throughout the development lifecycle of the SLS booster.

“With the help of our outstanding suppliers, we have been able to design, develop, test and streamline operations as we prepare for the first launch in 2018,” said Precourt. “We are progressing toward actually putting humans on Mars – not just talking about it.” 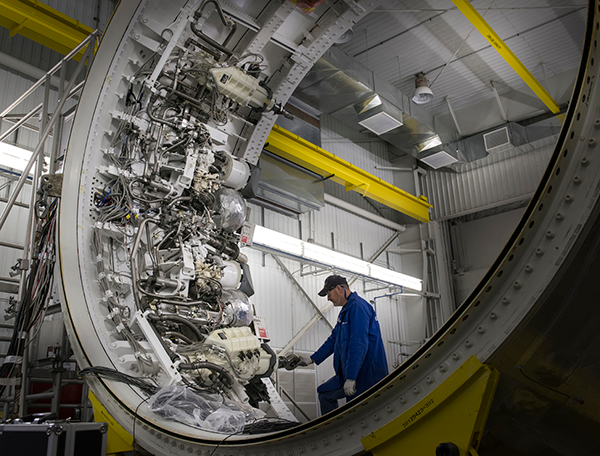 The avionics subsystem and hardware is shown in Orbital ATK’s Promontory, Utah, Test Bay T-97, in preparation for the September 22 avionics and controls testing for NASA’s SLS booster. The hot-fire test simulated the test cycle that will be used during next spring’s booster test (QM-2), which closely resembles real flight conditions.
]]>
Share Tweet Share Email Print