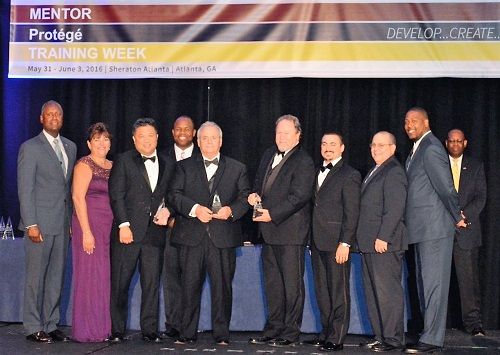 The Nunn-Perry award is presented to the foremost Mentor-Protégé teams that excel in the areas of technical assistance, returns on investment, quality and protégé development. The award is named in honor of former Senator Sam Nunn and former Secretary of Defense William Perry. The program was enacted into law in 1990 and is celebrating its 25th anniversary.

An award ceremony, attended by key DoD officials and industry leaders, was held in Atlanta, Georgia, earlier this month. Employees Bob Rusinek and Bill Labadie were in attendance to accept the award for Orbital ATK.

“Thank you for your support, dedication and superior achievements,” said Kenyata Wesley, Acting Director DoD Small Business Program in a letter. “You made a substantial contribution to another successful year for the Department’s Mentor-Protégé Program.”

“It was an honor to receive this prestigious award from the Department of Defense,” said Bob Rusinek, Senior Director of Supply Chain. “Our team, led by Bill Labadie, worked with a devoted team at Martinez & Turek to incorporate best practices and streamline processes while improving quality and schedule in support of U.S. warfighters.”

In 2011, Orbital ATK developed a close working relationship with M&T, when the protégé provided the design and build of the transporter, erector, and launch ground support system for the Antares space vehicle.

Orbital ATK is proud to participate in programs such as the Mentor-Protégé to demonstrate our support for DoD, MDA and the U.S. warfighter.