On a windy and warm August day, a crowd of Florida legislators, contractors, NASA officials, members of the 45th Space Wing and other invited guests gathered in High Bay 2 of Kennedy Space Center’s Vehicle Assembly Building (VAB) to mark the start of Northrop Grumman’s use of the historic landmark to integrate its new OmegA rocket. The tall bay doors were open, and sunlight filled the vast space where OmegA will stand atop Mobile Launch Platform-3 (MLP), the same one used for the Apollo 11 moon mission 50 years ago.

The event commemorated Northrop Grumman becoming the first commercial partner to occupy the iconic NASA building. Kennedy Space Center (KSC) opened in 1958, initially supporting the Apollo Program and then the Space Shuttle Program. As the shuttle program came to an end, it became evident NASA no longer needed some of the existing facilities and capacity. This time coincided with the rise of the commercial space industry, and NASA decided to adopt a revolutionary concept: the facility would become a multi-user spaceport.

OmegA shares the VAB with NASA’s Space Launch System (SLS) and Orion vehicle, two key elements of the Artemis program. With Artemis, NASA aims to send humans to the Moon by 2024. Northrop Grumman is an industry partner for Artemis, providing the two powerful solid rocket boosters for each SLS launch. 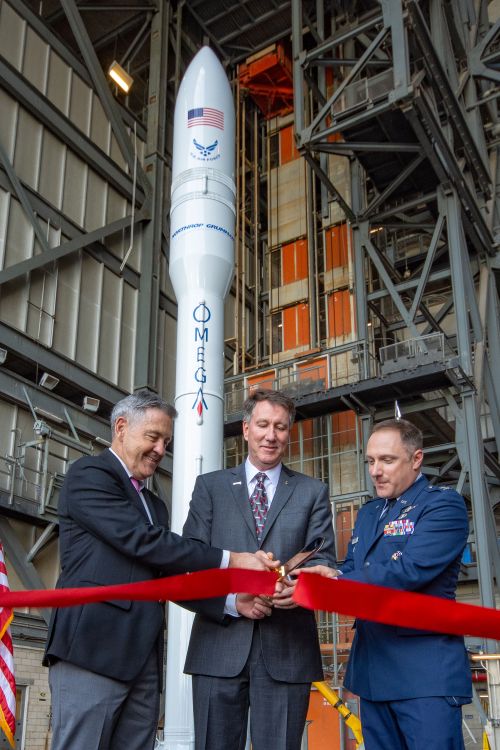 Bob Cabana, Kennedy Space Center director, spoke to attendees about how OmegA helps fulfill this new business model. “What an outstanding use of this facility. We only need one bay to support the Space Launch System and Orion, and we only need one launch pad. Wouldn’t it be great if we could utilize that pad and this facility to support our nation’s other needs in space? Helping support it with the OmegA rocket is what’s going to happen,” Cabana said.

The VAB and MLP have the infrastructure needed to stack large rocket segments, as does pad 39B, from which OmegA will launch. Because OmegA’s design is compatible with this infrastructure, the company is able to use existing facilities rather than build new ones. The result is a win-win for NASA and the U.S. Air Force as NASA has a commercial tenant using its current excess capacity, and OmegA launches are more affordable for the Air Force.

From the podium in the VAB, Col. Thomas Ste. Marie, vice commander of the Air Force’s 45th Space Wing, said, “This whole area has been home to innovation and the drive to be bolder. These efforts, government and contractor, have fueled the economies and the imagination and, really, the spirit of this community that we like to call the Space Coast.” 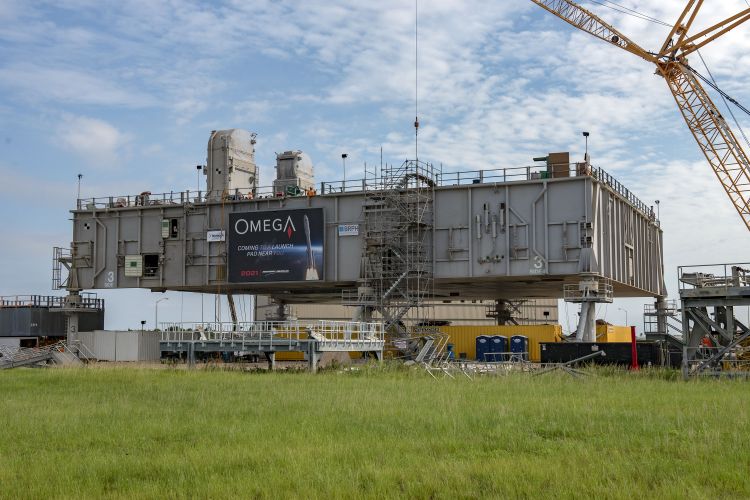 Northrop Grumman is modifying Mobile Launch Platform-3 for its OmegA rocket. Notable past missions launched from MLP-3 include the Apollo 11 moon mission and the final space shuttle mission.

Ste. Marie said the 45th Space Wing is doing its part to support KSC’s multi-user spaceport vision with its “Drive to 48” initiative, which calls on the Air Force to develop the capability to support a combined total of 48 defense, civil and commercial launches a year on the Eastern Range. OmegA launching from KSC will help fulfill this drive.

The concluding speaker was Northrop Grumman’s OmegA Vice President Kent Rominger. “With OmegA, we truly are standing on the shoulders of the giants of space history,” Rominger said. “Today’s ribbon cutting marks not only a milestone for the OmegA launch system, it marks the beginning of a strong partnership with the KSC spaceport, the U.S. Air Force and other contractors contributing to a bright economic future for the Space Coast. I am honored to work alongside all of you and look forward to seeing the bays of this building and the operations at KSC in full force.”

At the end of the ceremony Rominger, Cabana and Ste. Marie cut a bright red ribbon in front of an impressive OmegA model, calling to mind how KSC is becoming a bustling spaceport for multiple users. Like Northrop Grumman’s commercial use of the VAB, each new partnership demonstrates KSC’s evolving vision and its continued focus on remaining the top destination for premiere space launches. 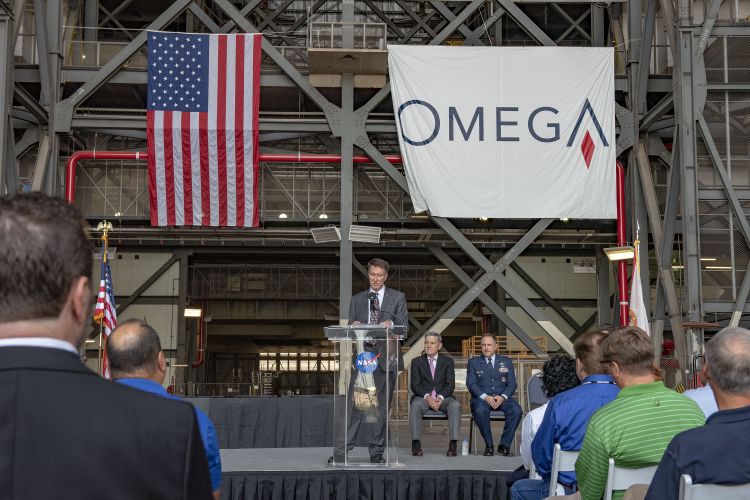