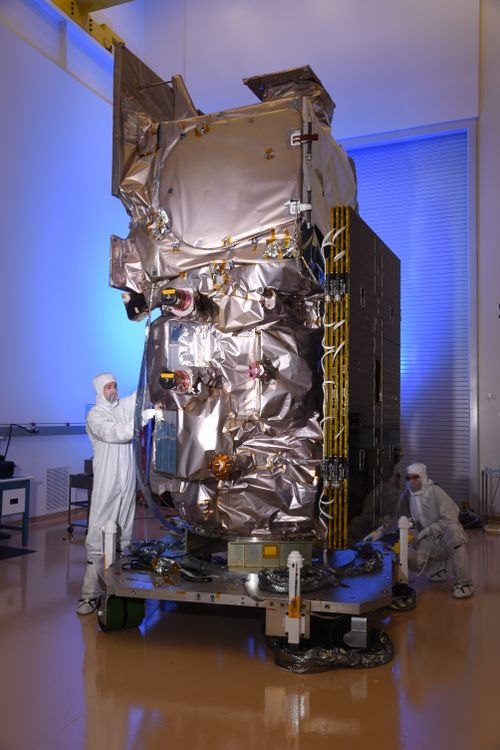 ICESat-2 will provide precise measurements of the changing height of Earth’s glaciers, ice sheets and sea ice. The satellite will enable scientists to measure the topography of the Greenland and Antarctic ice sheets in unprecedented detail. “ICESat-2 demonstrates the company’s expertise in delivering high-quality Earth science satellites that help scientists gain a better understanding of the changes that can affect the planet’s frozen and icy areas,” said Steve Krein, vice president, science, environmental and weather programs, Northrop Grumman. “As a key focus of NASA’s Earth science research, ICESat-2 paves the way for scientific discoveries that will yield new data on the potential effects of a changing Earth.”

Originally designed and built by McDonnell Douglas, Delta II entered service in 1989, and Northrop Grumman and its heritage companies have been a vital part of that unprecedented 30-year success.

“This is an emotional launch for me” said Mark Pieczynski, vice president, business development, flight systems, Northrop Grumman Innovation Systems. Prior to joining the company in 2007, Pieczynski held a series of senior-level positions on Delta launch vehicle programs for McDonnell Douglas, The Boeing Company and ULA. “With this last Delta II launch, I have been part of delivering 97 satellites to orbit atop the Delta II. I’ll miss her.”

Northrop Grumman has been supplying solid propulsion motors to ULA and its predecessor companies for a variety of launch vehicles since 1964 and is ULA’s largest legacy supplier of solid propulsion.

As one program comes to an end, another begins. Northrop Grumman began developing a 63-inch diameter GEM motor about three years ago, and is planning its first static fire for Sept. 20 in Promontory, Utah. Using advanced technologies, the company developed this new rocket motor for use on ULA’s Atlas V launch vehicle.

“I’m proud to be part of a company that has been supplying solid propulsion rocket motors for more than 50 years,” said Scott Lehr, president, flight systems, Northrop Grumman. “We’re pleased that our most recent product has reached this important milestone, as we prepare to continue serving ULA.”

The GEM 63 motor will be used as a direct replacement of the previous strap-on boosters on ULA’s Atlas V rocket beginning July 2019 with the Space Test Program (STP)-3 mission that will use five boosters. Additional missions will follow, each of which could include up to five solid rocket motors.

Northrop Grumman is also developing a GEM 63XL motor using internal funding for use on ULA’s Vulcan Centaur rocket, which will fly with up to six GEM 63XLs per flight. The first GEM 63XL case, which is the longest non-segmented, monolithic case ever manufactured, has already been wound at a new facility in Clearfield, Utah.

“It’s an exciting time for Northrop Grumman to play a large role in the future of rocket propulsion,” said Lehr. “Our history shows an impressive launch record, and I’m confident our future will do the same.”