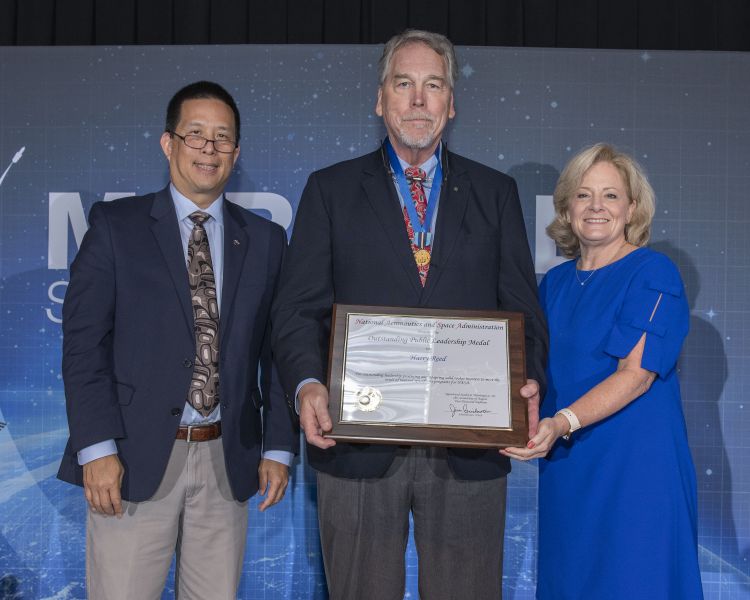 “Harry’s technical and programmatic contributions to the shuttle program and his commitment to the next deep space human rated launch vehicle, the Space Launch System, are invaluable,” said Jody Singer, the acting director of NASA’s Marshall Space Flight Center. “His commitment to exploration, mission safety and the people make him so deserving of the Outstanding Public Leadership Medal.”

Reed has distinguished himself as an exceptional leader through various leadership positions within Northrop Grumman including program manager positions, work center director and space shuttle deputy program manager. He is currently the senior director for the booster element of the Space Launch System (SLS) program.

“Harry's vast experience in production and manned space flight gives me great confidence as we approach the first flight of the SLS vehicle,” said Bruce Tiller, NASA’s manager of the SLS Boosters Office at Marshall Space Flight Center. “I routinely rely on his leadership and his integrity to make sure we are on the right path.”

During Reed’s years as a manager on the space shuttle program, he was essential to the implementation of design initiatives to balance the overall production flow, eliminate waste and improve the efficiency and repeatability of the reusable solid rocket motor manufacturing process. He directed the successful property disposition and transfer program at the end of the Shuttle Program, and he was the “boots on the ground” leadership when flight segments were damaged after a train trestle collapsed.

“Harry has long been a nationally-recognized technical expert in solid rocket motors, but he equally deserves recognition for being a truly exceptional leader,” said Charlie Precourt, vice president and general manager, propulsion systems, Northrop Grumman. “He fosters an environment where the women and men on his team understand they are part of something great, and I am very pleased to see him receive NASA’s Outstanding Public Leadership Medal.”

Recently, Reed led Northrop Grumman through a successful Booster Element Design Certification Review. He has also been managing heritage assets and establishing business systems to start up SLS booster production at Kennedy Space Center. When SLS launches in 2020, returning humans to deep space for the first time in over four decades, the performance of the SLS boosters will largely be a credit to Reed and his team.