For decades, Northrop Grumman has been a valued partner of the U.S. Navy. The company is also a strong supporter of science, technology, engineering and mathematics (STEM) education, and it continues to find ways to connect both initiatives.

The company’s Navigation and Maritime Systems Division has significant operations in Charlottesville, Virginia, and Annapolis, Maryland, among other locations. In Charlottesville the company develops and provides the Voyage Management System (VMS), a navigation software capability that is now a fleet standard with the U.S. Navy, already installed or under contract for installation on more than 200 Navy ships, submarines and education facilities.

In 2016, Northrop Grumman donated 135 licenses of its VMS software to the U.S. Naval Academy Foundation for midshipman training – a gift valued at $3.1 million. The VMS software incorporates the most recent version of the Electronic Chart Display and Information System-Navy which was selected by the navigator of the U.S. Navy. The donation enables future naval officers to achieve proficiency with the same navigation software on their vessels after they receive their commissions.

That gift continued a tradition dating back to 2001.Since then, Northrop Grumman and the Northrop Grumman Foundation have become strong, committed partners, donating more than $21 million in support of the Academy’s strategic priorities. In addition to this, the Northrop Grumman Foundation has made a significant investment in expanding the Academy’s cyber education offerings, as well as the new STEM Center for Education and Outreach. This academic year, the Foundation is supporting a USNA Cybersecurity Capstone Project, which will investigate and analyze cyber vulnerabilities affecting the navigation systems on USNA yard patrol boats. Participating midshipmen will identify and exploit potential risks to the software, develop mitigation options, and prepare a briefing on their findings. 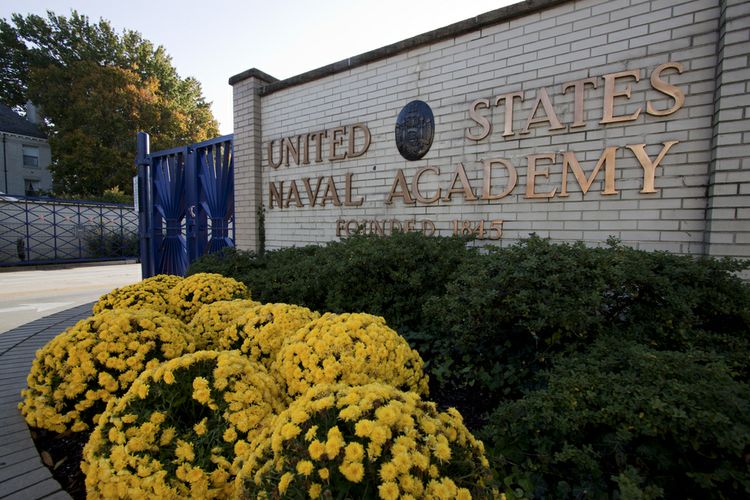 Northrop Grumman also sponsors the USNA’s Elmer A. Sperry Junior Navigator of the Year Award, given annually to the member of the Academy’s graduating class who demonstrated outstanding navigating skills and knowledge during his or her four years at the academy. The 2017 recipient was Ensign Hannah Sperl. The award was established by the company to honor Elmer A. Sperry, who founded Sperry Marine (now part of Northrop Grumman) in 1910. Sperry invented the first marine gyrocompass in 1908 and earned more than 350 patents during his career in the maritime industry.

“As a retired naval officer and an eighteen year employee at Northrop Grumman’s Charlottesville facility, I have had the opportunity to teach and coach at the USNA, as well as work with and lead many graduates from the Naval Academy,” said Jeff Holloway, a site director at the company’s Maritime Systems business unit and also a USNA graduate. “These young men and women are among the best our nation has to offer and we are very proud to support them as future officers of the U.S. Navy through our software donations, award recognition and capstone projects.”

This past year, the company forged a new connection to the USNA by supporting the Academy’s focus on advancing expertise around the cyber mission. For the first time, Northrop Grumman hosted three midshipmen interns. One of the students worked on a cyber resiliency independent research and development initiative, learning about the company’s resiliency approach: start secure, stay secure, return secure. The other two students applied their classroom skills to write scripts used for a project management program.

“The internship allowed these students to exercise their knowledge and further understand the applications of computer science in industry,” said Chris Valentino, director of joint cyberspace programs and technical fellow, Northrop Grumman Mission Systems. “We look forward to continuing this special partnership with the Naval Academy over the years ahead.”

Being a close neighbor, Northrop Grumman’s Undersea Systems unit in Annapolis has a longstanding, ongoing relationship with the USNA. A number of midshipmen have held summer internships at the company’s nearby facility. As early as 2000, the company’s subject matter experts provided technical and program execution expertise to the USNA systems engineering classes participating in the annual Office of Naval Research Autonomous Underwater Vehicle competition.

The USNA has a number of advanced engineering facilities to support midshipmen’s undergraduate development. Over the years, Undersea Systems engineers have brought materials and hydrodynamic issues for test and evaluation, providing real-world challenges and tasks to the midshipmen.

“My time and experiences at the Naval Academy changed my life in so many important ways,” said David Portner, a director at Northrop Grumman’s undersea systems business unit. “The leadership skills, mission focus, and commitment to integrity that served me so well as a naval officer have been instrumental in my civilian career as well. Now, to be able to share that experience and some of those lessons with new generations of midshipmen at the academy is an honor and a privilege.”