The three-stage Pegasus XL will be used to deploy eight small satellites for NASA’s Cyclone Global Navigation Satellite System (CYGNSS) mission into a Low-Earth orbit. Pegasus is carried aloft by Orbital ATK’s Stargazer L-1011 aircraft to approximately 40,000 feet over the Atlantic Ocean, where it will be released and free-fall for five seconds before igniting its first stage rocket motor. With its unique delta-shaped wing, Pegasus will deliver these satellites into orbit in a little over 10 minutes.

CYGNSS, developed by the University of Michigan, will probe the inner core of hurricanes to learn about their rapid intensification. CYGNSS is designed to remedy the inability of current remote sensors to see through the heavy rain in the inner core of a hurricane or to observe changes in the storm over short periods of time. 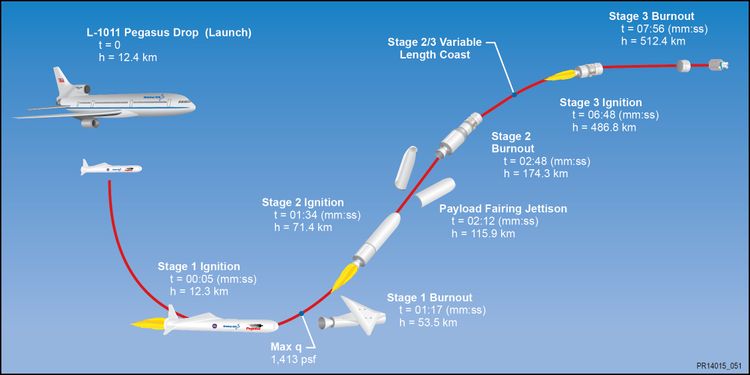 On April 5, 1990, Orbital ATK began a new era in commercial space flight when our Pegasus rocket was launched from beneath a NASA B-52 aircraft in a mission that originated from Dryden Flight Research Center in California. In the decades since its maiden flight, Pegasus has become the world's standard for affordable and reliable small launch vehicles. It has conducted 42 missions, launching 86 satellites.

This patented air-launch system provides customers with unparalleled flexibility to operate from virtually anywhere on Earth with minimal ground support requirements. Pegasus launches have been conducted from six separate sites in the U.S., Europe and the Marshall Islands, the first time a space launch vehicle has demonstrated such operational flexibility. Pegasus XL is a category 3 NASA-certified vehicle.