Orbital ATK successfully launched its Minotaur C rocket from Vandenberg Air Force Base, California, on October 31 at 2:37 p.m. PDT. The space launch vehicle deployed six SkySat and four Dove spacecraft, which will capture medium and high resolution multispectral imagery of Earth at unprecedented scale and frequency for the commercial market. 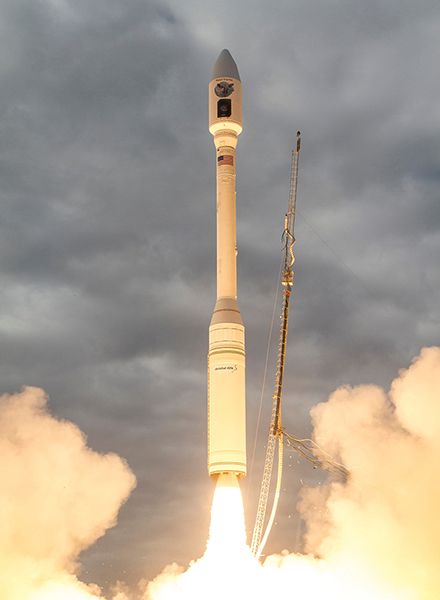 Background on Minotaur C
The Minotaur C space launch vehicle is a variant of the Minotaur product line designed to support U.S. government and commercial customers. Minotaur C employs four Orbital ATK solid rocket motors as its propulsion system, all of which have been flown dozens of times and are thoroughly flight-proven in various combinations on the company's other small space launch vehicles, including Pegasus, Taurus and Minotaur, as well as on the Orbital Boost Vehicle (OBV) long-range missile defense interceptor. It will also incorporate numerous design features that are common with the Minotaur product line, such as the rocket's electrical power system, payload fairing, flight termination system, navigation sensors and RF components.

Background on SkySat and Dove Spacecraft
The Dove and SkySat satellites are some of the most capable spacecraft per kilogram ever, capturing medium and high resolution multispectral imagery of Earth at unprecedented scale and frequency. A record-breaking 271 Dove satellites have been successfully deployed and operated in space and today collect more imagery per day than any other commercial provider. The SkySat constellation of 7 SkySats, soon to be 13, is the world’s largest commercial, sub-meter fleet of high-res satellites operating in space. Together, the Dove and SkySat network of remote sensing satellites deliver a global information feed to businesses, governments, and NGOs around the world.