The SS Rick Husband reentered the atmosphere at 9:29 a.m. EDT, concluding the successful OA-6 mission. Prior to departure from the International Space Station, astronauts installed the Reentry Breakup Recorder with Wireless Sensors (REBR-W) on Cygnus. REBR-W, developed by The Aerospace Corporation, will allow for better understanding of spacecraft behavior during atmospheric reentry and breakup, leading to improved vehicle safety and design in the future. REBR-W recorded and transmitted Cygnus’ safe, destructive reentry into Earth’s atmosphere.

The SS Rick Husband departed from the International Space Station at 9:30 am EDT (13:30 UTC) after 81 days at the orbiting laboratory. Cygnus will now complete three additional science experiments; the Spacecraft Fire Experiment-I (Saffire-I), the deployment of five CubeSat satellites from the NanoRacks CubeSat Deployer and the Reentry Breakup Recorder (REBR) test.

The Spacecraft Fire Experiment-I (Saffire-I), was initiated by NASA’s Glenn Research Center at 2:40 pm EDT (18:40 UTC). Data from the experiment will continue to arrive over the next several days.

The SS Rick Husband was successfully grappled by astronauts using the International Space Station’s robotic arm at 6:51am EDT on Saturday March 26, 2016. The crew then maneuvered Cygnus for berthing to the Unity module of the station which occurred at 10:52 am EDT.

The Cygnus vehicle and mission continue to perform nominally with no issues being worked by our operations team. We are working toward a JTRP arrival time of 03:24 Saturday EDT with capture at the International Space Station set for 06:30 Saturday EDT. Follow us on Twitter for the latest updates.

The Cygnus spacecraft successfully launched aboard a United Launch Alliance (ULA) Atlas V launch vehicle with approximately 7,900 pounds (3,600 kilograms) of cargo and small satellites that will be deployed directly from the spacecraft. The launch marks the beginning of our fifth operational cargo resupply mission (OA-6) for NASA, and the first Cygnus to conduct scientific experiments onboard the spacecraft. Cygnus will deliver vital equipment, supplies and experiments to astronauts aboard the International Space Station (ISS) as part of its Commercial Resupply Services-1 (CRS-1) contract with NASA.

Lift-off of the Atlas V rocket took place at 11:05 p.m. (EDT) on March 22 from Cape Canaveral Air Force Station, Florida. Following a 21-minute ascent, the S.S. Rick Husband Cygnus spacecraft was successfully deployed into its intended orbit approximately 144 miles above the Earth, inclined at 51.6 degrees to the equator. Orbital ATK’s engineering team confirmed that reliable communications have been established and that the vehicle’s solar arrays are fully deployed, providing the necessary electrical power to operate the spacecraft. 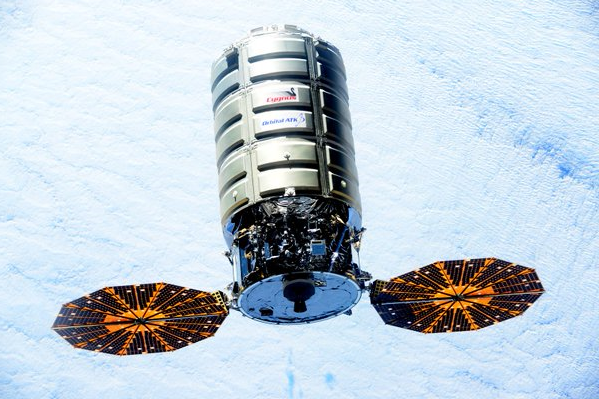 For the OA-6 mission, Orbital ATK’s Cygnus advanced maneuvering spacecraft is carrying approximately 3,600 kg (7,900 lbs.) of supplies and science experiments for the International Space Station (ISS). Under the Commercial Resupply Services (CRS) contract with NASA, Orbital will deliver approximately 28,700 kilograms of cargo to the ISS. OA-6 is the fifth of these missions.

The OA-6 mission will be the second Cygnus mission utilizing the Atlas V launch system, providing increased performance and flexibility to the Orbital ATK cargo delivery service. This mission will again utilize the Kennedy Space Center and launch from the Cape Canaveral Air Force base in Cape Canaveral, Florida.

The launch portion of the mission will last approximately 21 minutes from ignition of the Atlas V rocket to the separation of Cygnus in its initial target orbit. Approximately one hour after separation, Cygnus will unfurl its circular UltraFlex™ solar arrays and over the next two days raised its orbit in order to rendezvous with the space station. Astronauts aboard the ISS used the station’s robotic arm to grapple Cygnus and berth it to the Unity node of the space station.

Cygnus will remain attached to the station for approximately two months, during which time the station crew will remove the cargo from Cygnus and fill it with materials for disposal. Cygnus carries the Saffire payload experiment to study combustion behavior in the microgravity environment, which will be conducted after the spacecraft departs the ISS. The results will be downloaded via telemetry prior to Cygnus safely reentering the atmosphere over the Pacific Ocean. 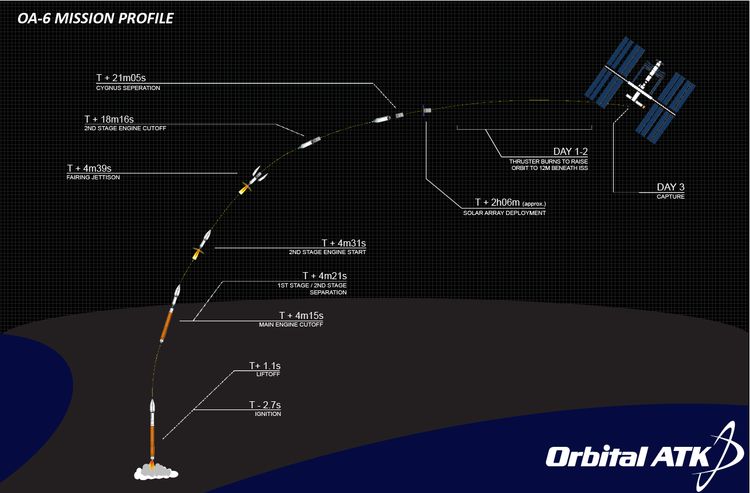 Cygnus is a low-risk design incorporating elements drawn from Orbital ATK and its partners’ existing, flight-proven spacecraft technologies. Cygnus consists of a common Service Module (SM) and a Pressurized Cargo Module (PCM). The SM is assembled and tested at Orbital ATK’s Dulles, VA satellite manufacturing facility and incorporates systems from Orbital ATK’s flight-proven LEOStar™ and GEOStar™ satellite product lines. The PCM is based on the Multi-Purpose Logistics Module (MPLM) and was developed and built by Thales Alenia Space of Italy.

The Cygnus spacecraft for the OA-6 mission is the second to employ the longer, enhanced PCM which can carry a greater volume of cargo than the PCM flown on previous missions, and lightweight UltraFlex arrays developed and built by Orbital ATK’s Goleta, CA facility.

The Cygnus spacecraft for this mission is named the S.S. Rick Husband. Learn more about Rick Husband here.