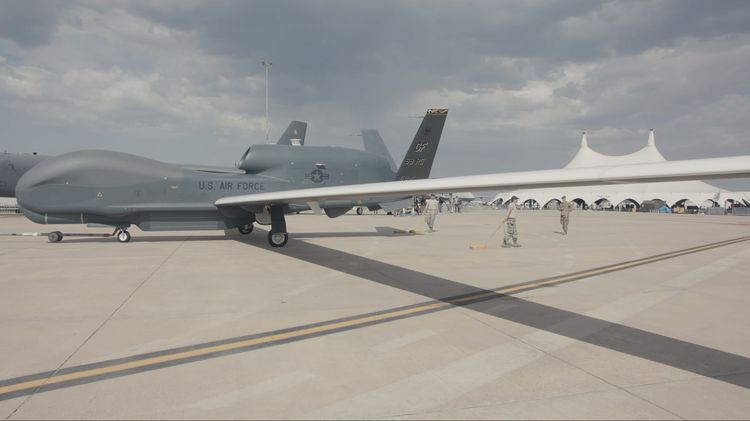 From starting out as a speck in the sky, the aircraft flew in smoothly, landing precisely on the runway before pausing and then taxiing itself to a point where it was towed to the static display area.

This autonomous system has been supporting the U.S. and its allies for nearly two decades around the world. The Block 40 aircraft arrived after a 13-hour, 3,075 nautical mile journey from Andersen Air Force Base.

With a wingspan of 130 feet – the same as a 737 - Global Hawk provides near-real-time actionable intelligence for more than 30 hours at a time – the unblinking eye in the sky, at altitudes of 60,000 feet or 11 miles high.

There are always several Global Hawk systems in the air somewhere in the world 24 hours a day; 7 days a week; 365 days a year, with flight crews operating the system halfway across the world out of harm’s way.

Welcomed by an excited crowd, this historic first for Global Hawk was made possible due to the support of and partnership with the United States Air Force, in collaboration with the Royal Australian Air Force and airshow organizers.