Ceres features more than 130 bright areas, which researchers say is a type of magnesium sulfate. They hypothesize these bright, salt-rich areas resulted from asteroid impacts, which unearthed an ice-salt mixture. This further suggests that Ceres has a subsurface layer that contains briny water-ice. One particular crater called Occator contains the brightest material on Ceres. Researchers cite that views of Occator seem to show a diffuse haze near the surface that fills the floor of the crater and may be associated with observations of water vapor made by the Herschel Space Observatory in 2014. Further analysis is needed to test what is causing the haze to occur.

In the second study, the Dawn science team found evidence of ammonia-rich clays in Ceres’ composition. Ammonia ice would evaporate on Ceres today because the dwarf planet is too warm. But, if combined with other minerals, such as nitrogen which can be found near Neptune, the ammonia molecules could be stable. As a result, the researchers suggest two theories – a) Ceres originated in the outer solar system; or b) it formed close to its present position between Mars and Jupiter and incorporated materials that drifted in from the outer solar system.

Dawn recently reached its final orbital altitude at Ceres, approximately 240 miles from the surface, and is now taking images from this location. The data is certain to help researchers unlock more mysteries. To read more about the studies featured in Nature, click here. 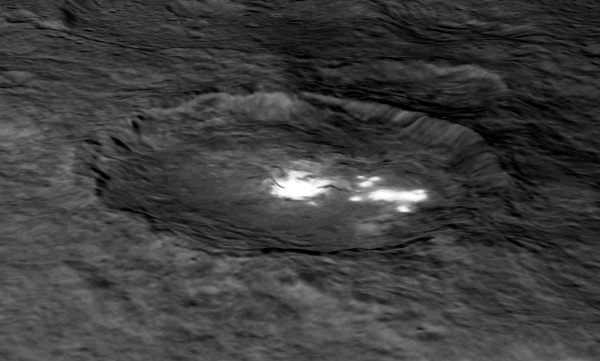 Occator Crater in Perspective​: An image of Occator Crater draped over a digital terrain model provides a 3-D-like perspective view of the impact structure. 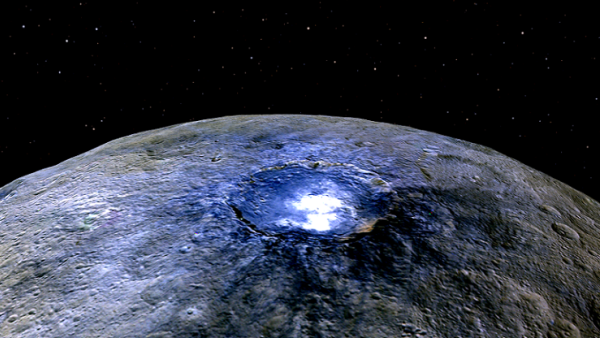 Occator in False Color: This representation of Ceres' Occator Crater in false colors shows differences in the surface composition. 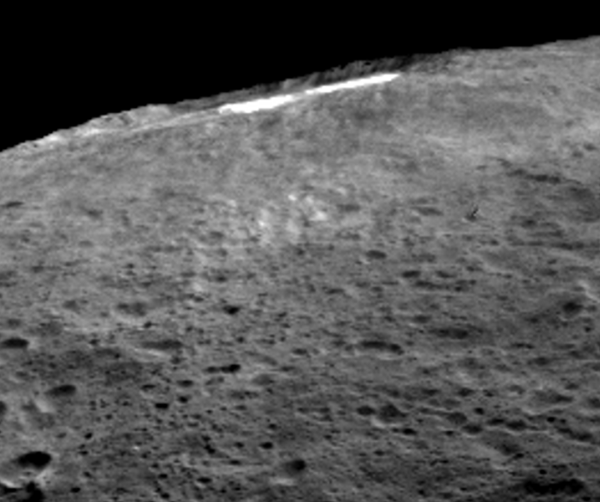 Lateral View of Occator: A group of scientists from NASA's Dawn mission suggests that when sunlight reaches Ceres' Occator Crater, a kind of thin haze of dust and evaporating water forms there.​​

More information about Dawn is available at the following sites:
http://dawn.jpl.nasa.gov
http://www.nasa.gov/dawn