Innovation Systems • Orbital ATK Archive
Share Tweet Share Email Print
In a journey that began at the Orbital ATK Satellite Manufacturing Facility in Virginia, NASA’s Dawn spacecraft is now in orbit around the dwarf planet Ceres. As the spacecraft enters its eighth year of a nine-year-long mission, Dawn has already advanced human understanding of planetary formation by giant leaps with the data it returned white orbiting its first destination, Vesta, the second most massive object in the main asteroid belt. As the first vehicle to orbit two planetary bodies, Dawn accomplished this feat with the innovative use of solar electric ion propulsion, the world’s most advanced and efficient space propulsion technology.

“Orbital ATK has been instrumental in the development, deployment and support of the Dawn spacecraft. Our flight-proven technology and extensive space systems experience played key roles in building the Dawn spacecraft and integrating the ion propulsion system provided by the Jet Propulsion Laboratory,” said Frank Culbertson, president of Orbital ATK’s Space Systems Group. “This technology is revolutionizing solar system exploration and made Dawn’s historic journey to two planetary bodies possible.”

Dawn has returned stunning imagery of Ceres over the past few months, reminding us that space exploration is never routine or predictable. Ceres’ now-famous white spots continue to intrigue researchers, generating several theories about their possible origin, including cryovolcanos, protruding ice masses and impact residue. Scientists hope that the imagery and data Dawn captures will help explain the spots and other mysteries of Ceres’ formation.

Dawn’s image quality now substantially exceeds the best available from the ground-based W.M. Keck Observatory and NASA's Hubble Space Telescope. By later this year, in its closest orbit around Ceres, Dawn will return images more than 800 times the resolution of Hubble. The images will provide mission scientists with a treasure trove of data to understand how Ceres evolved so differently from Vesta.

“The Dawn mission is the world’s first chance to get an up-close look at two bodies which date back to the formation of the solar system, but evolved very differently,” said Mike Miller, Orbital ATK vice president, Science and Environmental Programs, Civil and Defense Satellite Division. “Ceres is thought to contain substantial water, perhaps up to 27 percent of its mass, a quantity roughly equivalent to the fresh water on Earth. It is expected to be mostly in the form of ice, but there may also be a liquid subsurface ocean. Dawn’s detailed image and compositional data will help us understand this very exciting prospect.”

The most recent images received from the spacecraft, taken on March 1 show Ceres as a crescent, mostly in shadow because the spacecraft's trajectory put it on a side of Ceres that faces away from the sun until mid-April. When Dawn emerges from Ceres' dark side, it will deliver ever-sharper images as it spirals to lower orbits around the planet.

“More than a decade ago, we committed to developing this spacecraft in an innovative way to assure that it was reliable and affordable,” said Culbertson. “To see Dawn enter into this exciting science phase in fully functional status after several billion miles of deep-space journey is a testament to the design and workmanship skills of the JPL/Orbital ATK team.” 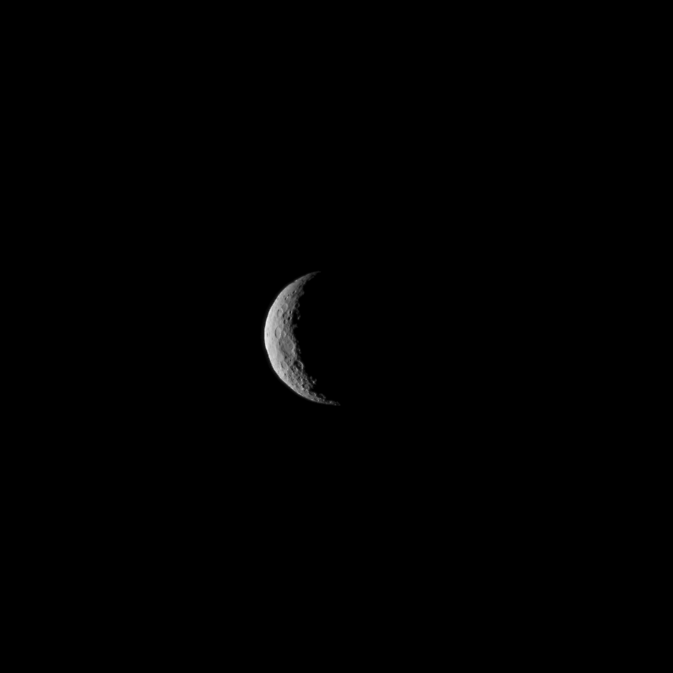 Ceres is seen from NASA's Dawn spacecraft on March 1, just a few days before the mission achieved orbit around the previously unexplored dwarf planet. The image was taken at a distance of about 30,000 miles (about 48,000 kilometers).Image Credit: NASA/JPL-Caltech/UCLA/MPS/DLR/IDA