Orbital ATK and the Cygnus team will be presented with this prestigious award at the mid-September AIAA Space and Astronautics Forum in recognition of the demonstrated success of the program. Orbital ATK launched the first Cygnus spacecraft on September 18, 2013 to perform resupply missions to the International Space Station under NASA’s Commercial Resupply Services contract. Since then, Cygnus has transported nearly 22,000 pounds of vital cargo and science experiments to astronauts after five missions to the orbiting laboratory.

“The hardworking and dedicated team behind the Cygnus program is what allows Orbital ATK to produce reliable, innovative, and affordable products for our customers,” said Frank Culbertson, President of Orbital ATK’s Space Systems Group. “Thanks to their efforts, Cygnus has demonstrated success in cargo deliveries to the ISS and as the host to important scientific research. We look forward to our continuing role in furthering human exploration of the solar system.”

“Our Cygnus spacecraft is an excellent example of Orbital ATK’s reliable, innovative and highly performing products making it a premier vehicle for NASA cargo resupply missions,” said Vice President and General Manager of the Advanced Programs Division Frank DeMauro. “Cygnus has always been a team effort, and this award goes to the entire team for their innovation, hard work and dedication in making the Cygnus program a success.” 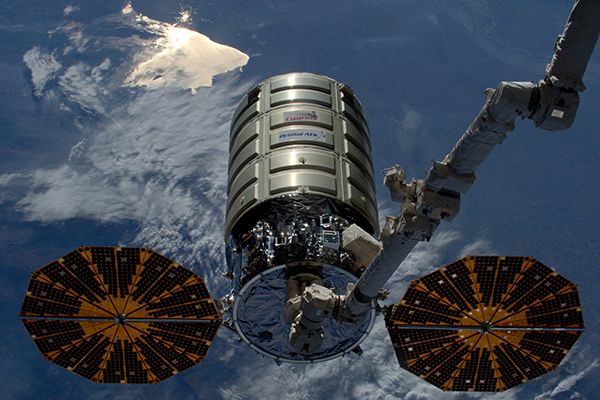 Orbital ATK will fly five more missions under CRS-1 before transitioning to the upcoming CRS-2 contract. The spacecraft has evolved over the years for its customers with demonstrated flexibility and versatility from launch options to increased cargo capability. Cygnus has launched aboard Orbital ATK’s Antares medium-class space launch vehicle, as well as United Launch Alliance’s Atlas V vehicle. On its most recent mission, OA-6, the spacecraft carried a company record of 7,900 pounds of cargo and science experiments to the International Space Station. Cygnus also flew for the first time on that mission as an in-orbit research platform for scientific experiments that enable deep space exploration.

The Cygnus spacecraft is in impressive company with previous winners of the AIAA Space Systems Award. Past winners include the Herschel and Planck Project Team from the European Space Research and Technology Centre, Mr. Michael D. Trela of Skybox Imaging inc., and Surrey Satellite Technologies Ltd’s Disaster Monitoring Constellation.