Imagine a place where ideas are transformed into advanced operational prototypes years ahead of existing technology. That’s just what happens in Northrop Grumman’s Navy-focused innovation centers, where creativity guides innovation.

Two research and development teams inside the Maritime/Land Systems & Sensors Division support the U.S. Navy: Dolphin Works™ on the company’s Annapolis, Maryland campus and Dragon Works™ on the Sunnyvale, California campus. Both teams are focused on advancing and extending the nation’s vital undersea superiority to solve some of the world’s most complex technical challenges. 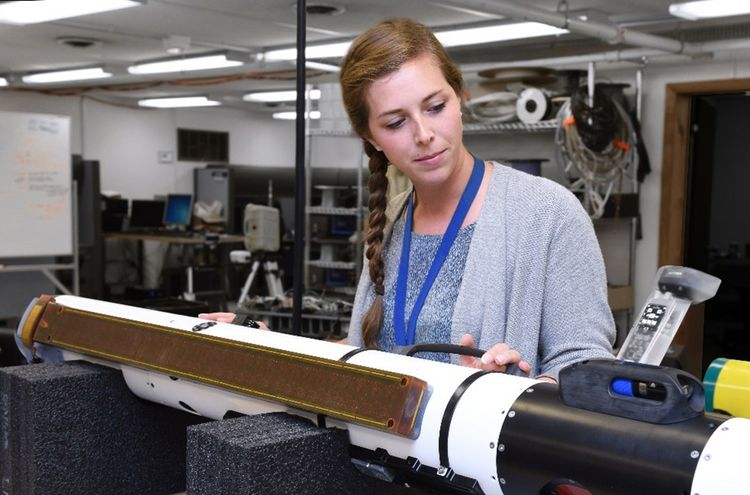 µSAS being tested at the Dolphin Works facility

This multi-disciplined team applies a “spiral” development process. This approach focuses on first tackling the most pressing and foundational challenges, and then moving incrementally to second, third, and subsequent iterations, based on the successful completion at each stage. “This culture and workflow of continually chipping away at the problem has, in essence, lit a fire inside the hearts of members of the team that continues to burn to this day,” said Dave Smallwood, a Northrop Grumman fellow in Annapolis. “The drive to get to the next level was fueled by a continuous effort to disrupt their own technology.”

The AN/AQS-24B/C minehunter is considered the fastest mine hunting system on the market and is used all around the world. The µSAS system is an open architecture software-defined, state-of-the-art SONAR. It is modular in design, scaling in applications from small man-portable unmanned underwater vehicles (UUVs) to submarines, and is considered by customers to be the industry standard in mission-ready, high-performing synthetic aperture sonar.

On the opposite coast, Dragon Works is focused on advanced development projects to support both the launcher and power and propulsion machinery operating units within Marine Systems located in Silicon Valley.

Jeff Zerbe, senior director of Dragon Works, considered several different approaches before converging on a small core team concept with matrixed engineering support. “We wrapped in all non-contractual technical activity as well as capital management into Dragon Works to ensure we were looking at the future holistically from an investment, sustainment and site capacity perspective.”

Dragon Works began initial operations in 2018 and the key to success was building an advanced development culture to be inclusive of both the launcher and machinery teams. “We started bringing in contract research and development contracts for the next-generation submarine and several Strategic Capabilities Office projects,” Zerbe said.

Currently Dragon Works conceives and manages both internally funded development projects and customer funded projects. These projects mature and de-risk critical technologies key to their future business while providing the U.S. Navy and other DoD customers leading edge technology as well as capabilities that advance the nation’s defense.

As a Navy focused innovation center for submarine launched missile systems and extremely quiet submarine propulsion and power generation systems, Dragon Works program managers and design engineers are actively engaged in several projects simultaneously. Key priorities include enhanced capabilities onboard the existing VIRGINIA-class fast attack submarines, guiding the architecture of the next generation of fast attack submarines (also known as SSN(X)), and breaking into key adjacent market opportunities through the use of novel missile launch technologies.

“Our innovation hubs to ensure we remain ahead of the curve,” said Gary Huff, operations senior director of Dragon Works. “The next generation of fast attack submarines, the SSN(X), will feature innovative propulsion and power generation concepts for increased speed and stealth, in addition to advanced future launch system concepts to enable increased payload capability. This is why the Navy and their shipbuilders have turned to Dragon Works.”

In addition to innovating the next generation of submarines, Dragon Works is paving the way to adjacent markets for Marine Systems’ launcher products, such as surface ships. With Marine Systems’ conventional prompt strike (CPS) system, originally designed for SSN use, it is now also planned to be fielded onto the DDG-1000 class destroyers. Northrop Grumman is poised to expand our eject launch technology into the surface combatant market.