Apollo 13: Failure was not an option

“Deepest thanks: The Apollo 13 crew wants to express to the entire Grumman engineering and manufacturing team our deepest thanks for building a most outstanding spacecraft. Aquarius performed beyond expectations in providing our only means of returning home. Our highest praise for the continuous efforts of all the Grumman employees in the making of LM-7.” – Jim Lovell, Jack Swigert and Fred Haise, crewmembers of Apollo 13

Northrop Grumman has been a leader in space for more than 60 years, from missions supporting human discovery all the way to critical military space programs. What some may not know is how the company partnered with NASA and other contractor teams to help Apollo 13 Mission Commander Jim Lovell, Lunar Module Pilot Fred Haise and Command Module Pilot Jack Swigert safely return home.

Fifty years ago today, April 17, 1970, the Apollo 13 Command Module and crew safely returned home, splashing down in the Pacific Ocean as more than 40 million Americans tuned in to watch.

Grumman Aerospace engineers designed and built the Apollo Program Lunar Modules in Bethpage, New York, with the final assembly, test and launch at Kennedy Space Center in Florida. TRW engineers built Aquarius’ descent engine and programmed the Lunar Module’s abort guidance system at Redondo Beach in California. Those engineers from Grumman and TRW, heritage Northrop Grumman companies, were instrumental in enabling the rescue operation a half century ago.

Like its predecessors on previous Apollo missions, the Apollo 13 spacecraft consisted of several connected modules: the Command and Service Module (CSM) called Odyssey, and the Lunar Module (LM) called Aquarius. This unique spacecraft was designed to detach from the CSM and descend to the moon’s surface, then serve as base camp during the exploration of the Fra Mauro lunar highlands. 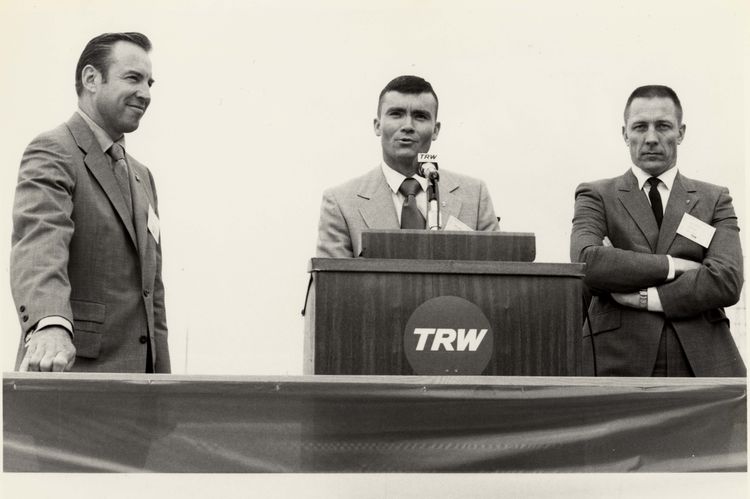 Aquarius’ final task of the mission would be to launch the astronauts from the moon’s surface back to Earth using the ascent stage to the CSM — where once inside, that stage would be released into the atmosphere. Prior to the Command Module making its final descent to earth, the Service Module would also be jettisoned and burn up in the atmosphere.

The mission was going as planned until an explosion occurred onboard the CSM 56 hours into the mission. This unexpected and highly dangerous situation critically affected the CSM’s power and oxygen supply, prompting NASA to abort the lunar landing and concentrate solely on bringing the crew home safely.

Since critical elements aboard the spacecraft were built by TRW and Grumman engineers, many were urgently called in to help solve this mission-critical problem. Some of the TRW team immediately traveled to NASA in Houston, Texas, and to Grumman offices in Bethpage, New York, while others worked from the now-Northrop Grumman Space Park campus in Redondo Beach, California.

Tens of thousands of miles above earth, the three Apollo 13 crew members rationed their supplies and took shelter in Aquarius. The LM, which was only intended to accommodate two astronauts for 36 hours during a lunar surface mission, now had to sustain three astronauts for more than 86 hours. Back on earth, engineers were faced with the daunting task of figuring out how to safely return the crew using only the equipment already aboard the spacecraft.

Engineers devised a solution leveraging the engine of the LM to place the spacecraft onto a return trajectory to Earth, as well as increase the speed of the return. With a plan in place, the team jumped into action, averting disaster and capturing the attention of the nation. A nationwide audience tuned in to their televisions to watch coverage of the rescue landing. 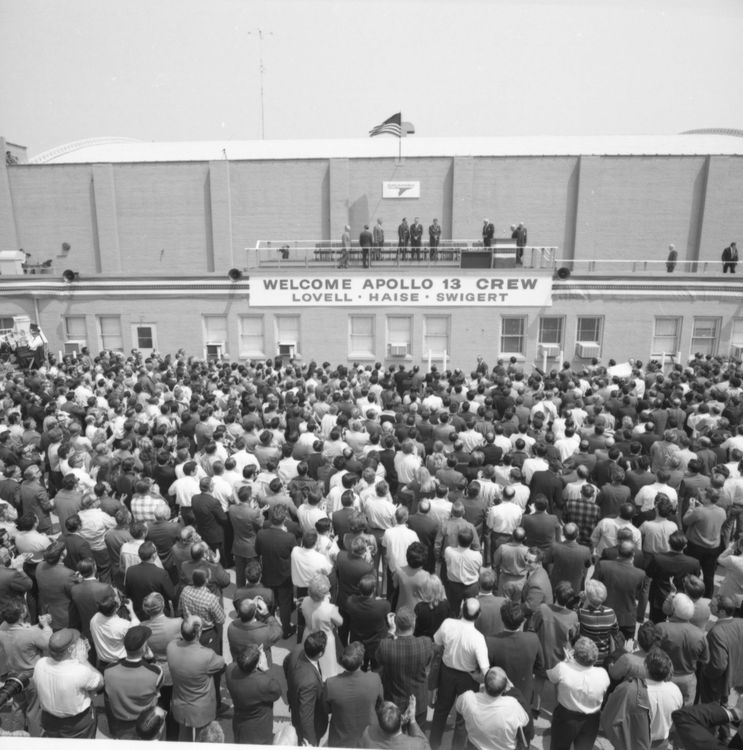 The following day, President Richard Nixon awarded the Presidential Medal of Freedom to the Apollo 13 astronauts and Mission Operations Team. He also sent a note of thanks to Grumman President Joe Gavin, thanking his team for their commitment to getting the job done.

On May 5, 1970, the Apollo 13 crew visited the Grumman facility in Bethpage and celebrated their safe return at a ceremony with thousands of employees. “If we don’t do anything else, let’s get back up to Grumman and say ‘Thanks!’” said Lovell.

The crew visited the TRW engineers at Space Park the next day to express their gratitude in person where thousands flocked to the event. “The only reason we are here today is due to the people on the ground, including many from TRW,” Lovell said to the crowd at Space Park.

The Apollo 13 mission, its crew, and the NASA-led team demonstrated ingenuity and problem solving under tremendous pressure that led to the rescue of the astronauts, capturing the attention of the entire world.

“You know there was an awful lot of teamwork on the ground… but with Apollo 13, there was one brief moment when all the people of the world were united,” said crewmember Jack Swigert.