Advanced Air and Missile Defense, in the Hands of Soldiers

It’s a cold December morning at White Sands Missile Range in New Mexico, and two surrogate cruise missile targets have just been launched, one after the other. They are flying separate courses among the jagged San Andres and Sacramento mountains toward soldiers in a U.S. Army Air and Missile Defense unit at a test site called TAC-2 – Tactical Command Post 2. 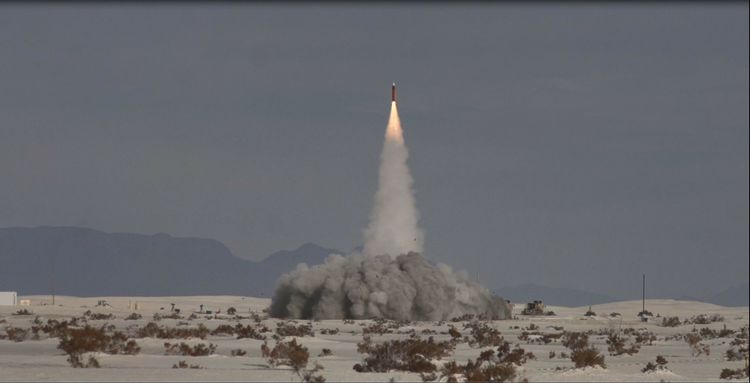 These sophisticated targets precisely mimic real cruise missile threats and can take advantage of this terrain to hide from the radars and sensors commanders have positioned in the area. This can create gaps in tracking that make the job of interceptor missiles or other defensive weapons more difficult – you can’t hit what you can’t see.

Today, though, their maneuvers won’t enable them to evade detection. This is Flight Test 5 (FT-5), the most sophisticated and difficult development test yet for the Army’s Integrated Air and Missile Defense (IAMD) Battle Command System (IBCS), developed by Northrop Grumman.

High above the range, sensors aboard U.S. Air Force F-35 fighter aircraft see and acquire the two surrogate missiles. IBCS integrates the aircraft sensor data with that of available ground sensors, including Sentinel, Patriot weapon system and U.S. Marine Corps TPS-59 radars. All share information via the IBCS Integrated Fire Control Network (IFCN). As one sensor loses sight of the threats – and each will at some point – the targets are acquired by other sensors on the IFCN, enabling IBCS to create a precise, uninterrupted composite track of each missile’s movements.

With data from every sensor, IBCS produces a single integrated air picture on the screens of the air defense soldiers at TAC-2. They see every change in altitude and direction as the two surrogate missiles paint tracks across their screens. Because IBCS enables joint weapons as well as joint sensors, the defenders at the controls can select the best effector to use against these targets. Today, the soldiers are about to launch two Patriot Advanced Capability 2 (PAC-2) interceptor missiles.

“Without IBCS, all those different sensors operate independently, creating opportunities for threats to avoid detection as they fly to a target,” explained Northrop Grumman IBCS Program Director Mark Rist. “Without being integrated onto a network, these sensors produce a more ambiguous, less-clear air picture, making engagements of threat systems more challenging.”

He is monitoring FT-5 from miles away, in the test’s mission control room. The soldiers at TAC-2 can be heard on the radio, calm but urgent voices reporting “target acquired” by airborne sensor, and talking of the “IP” or intercept point, and “kill box.” It’s only been moments since the threats were launched, but now comes “Free to engage … Missile away … Missile away …”

One, then another PAC-2 interceptor missile is launched by the soldiers. IBCS is not only able to launch the missiles, but also plays a critical role in the engagement by actively closing the fire control loop and providing in-flight updates as the PAC-2s converge on their targets. The surrogate cruise missile targets are closing in and can now be seen on video in the control room – and then suddenly they can’t: One, then the other disappears in a ball of fire as the PAC-2s destroy them.

Cheers erupted in the control room, and those of Rist and his team may have been loudest among the many generals, colonels and visiting officials that day at White Sands. After years of effort, working closely and constantly with soldiers, FT-5 fully demonstrated IBCS’s unprecedented capability to integrate sensors and effectors to detect, track and simultaneously engage multiple targets in flight.

“Information is ammunition, and IBCS is providing soldiers with more,” Rist said. “We brought a lot of things together in this development test. It was the first including joint operations with the Air Force F-35 and Marine Corps radar systems, the first with Air Defense Artillery soldiers at the controls, and the first involving software developed using our Agile methodology.”

FT-5 was the latest in a series of test successes, and further evidence of the program’s maturity as soldiers train on IBCS equipment in preparation for an important Limited User Test (LUT) this spring.

“I’m very proud of these soldiers and of the system’s performance,” said Colonel Phil Rottenborn, Army IAMD project manager. “This was the first time soldiers conducted a live engagement using IBCS in a developmental test, and they showed we are ready to go into the operational test phase.”

“Success!” said Col. Tony Behrens, Army Capability Manager for the Air and Missile Defense (AMD) Command, and a nearly 26-year career Air Defense Artillery (ADA) officer. “It showed me that an Army operator – not an engineer or software developer – can sit at that console and do his or her job. I am very comfortable and confident about the path we’re on.”

IBCS enables soldiers to be even more effective by integrating all the systems’ data and providing a common command-and-control (C2). Soldiers will only need to learn to use the IBCS C2, instead of spending time becoming specialists on only one or two of a dozen different sensor and weapon systems. That enhances IBCS’s already impressive battlefield survivability, because soldiers will be capable of using any of the available sensors with any available weapon systems at any command post connected to the self-connecting, self-healing IFCN.

Northrop Grumman’s open-architecture system-of-systems approach to IBCS eases the integration of any new or legacy sensor and effector systems, which is important for U.S. joint operations and to foreign governments. Poland has an agreement with the U.S. Army to purchase IBCS for modernization of the nation’s WISLA medium-range air defense system, and other countries have expressed interest as well.

With the success of FT-5, Northrop Grumman will now focus on the Army’s Limited User Test planned for later this year, followed by the low-rate initial production and full-rate production phases of the system, to field IBCS to Army air defenders in fiscal year 2021.

Behrens said the Army must have the IBCS capabilities to be effective and successful in future combat operations. “To me, it’s beyond critical,” he said. “We’re not just giving soldiers a new piece of equipment, a new piece of gear. We’re going to give them an entirely new way of operating on the battlefield that is so much more efficient. But it has to start with the system that enables you to do that.”

IBCS may also be the Army’s first big step toward multi-domain convergence – the next level above integration.

“Enabling multi-domain – or more accurately, all-domain – operations is vital to ensuring battlefield advantage and superiority,” said Brig. Gen. Brian Gibson, director of the Army’s AMD Cross-Functional Team, at an Association of the U.S. Army event in early March. “When successfully fielded, IBCS will be one of the Army’s pathfinder capabilities into what is becoming a top priority for our military leaders: joint, all-domain command and control.”