A New Era of Exploration: How Northrop Grumman is Powering NASA’s Artemis Missions

Humanity’s return to the moon will look different from previous visits. NASA’s Artemis program, launched by the Space Launch System (SLS), the most powerful rocket in the world, will land the first woman and next man on the moon. The program will establish sustainable exploration to go farther into deep space and conduct more science than its predecessors.

For the Artemis I mission, the SLS rocket, propelled by Northrop Grumman’s twin solid rocket boosters, will produce 8.8 million pounds of thrust to send the Orion spacecraft farther into space than any spaceship built for humans has ever gone before.

Last summer, Northrop Grumman shipped 10 rocket motor segments from Promontory, Utah, to the Kennedy Space Center via rail where the motor segments were assembled into two separate solid rocket boosters. The assembly of these boosters relied on 3D printing and computer modeling in order to modify heritage component designs from the shuttle program, or to create new components that are compatible with heritage assembly ones in use. 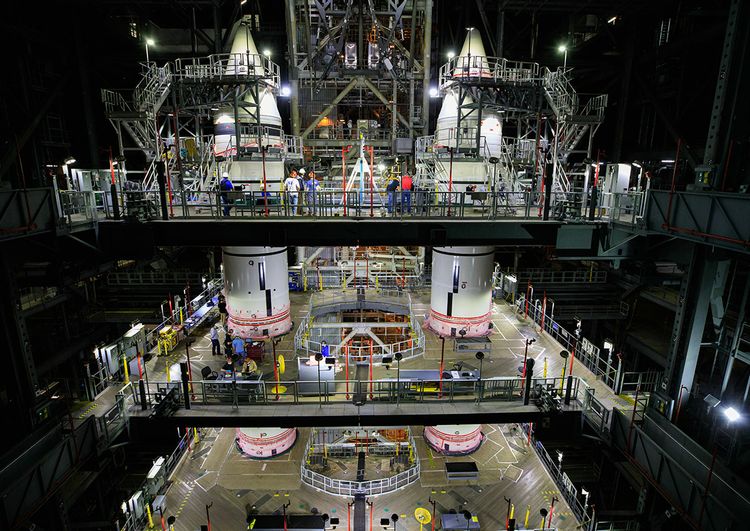 Now stacked and topped with forward assemblies, each booster stands 177-feet tall, or about half the size of the Statue of Liberty. The boosters are undergoing final preparations before uniting with the core stage and Orion spacecraft to construct the super heavy-lift SLS rocket for its first Artemis mission. The core stage completed a successful Green Run hot fire test on March 18, paving the way for delivery to Kennedy Space Center in April.

“Flight-ready solid rocket boosters for a NASA human spaceflight program have not resided in the Kennedy Space Center since the Space Shuttle Program’s final launch in 2011,” said Charlie Precourt, vice president, propulsion systems, Northrop Grumman. “These are the most powerful human-rated rocket motors ever produced for flight. The objectives of this program exceed that of the shuttle so our new five-segment booster configuration was designed to provide 20 percent greater average thrust in order to deliver more mass and volume to deep space.”

In addition to the boosters, the company also provides booster separation motors that push the twin rocket boosters safely away from the core stage once their role is complete. 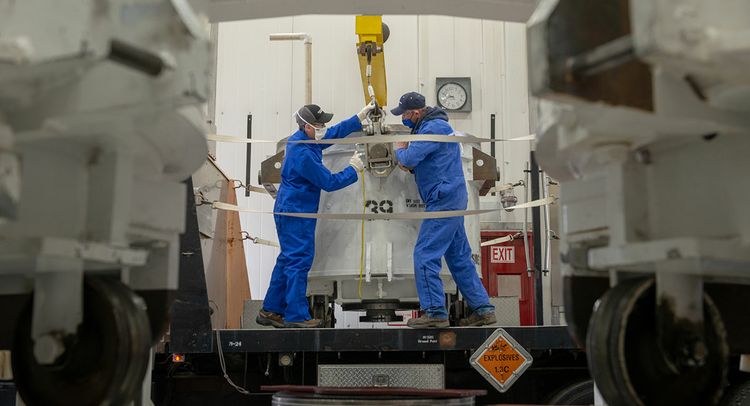 “Booster separation occurs a little over two minutes into the mission at approximately 25 nautical miles above Earth’s surface,” said Precourt. “The 16 motors, each providing 20,000 pounds of thrust in a one-second burn, will simultaneously fire to push the used rocket boosters safely away from the launch vehicle.”

Northrop Grumman also plays a critical role in crew safety and long-term habitability for Artemis. The company provides the abort and attitude control motors for the Launch Abort System of the Orion spacecraft to pull the crew to safety in the event of an emergency upon the launch pad or during early ascent.  Northrop Grumman is also providing the Habitation and Logistics Outpost (HALO) module for NASA’s lunar gateway to support sustainable and flexible exploration of the moon.

“Artemis is a new era of exploration that will bring untold innovations to us on Earth and inspire a new generation to reach farther than before,” says Precourt. “We are proud to continue our long-standing contributions to America’s deep space pursuits and quest for greater human space exploration.”